Towards a return of inflation and a rise in interest rates?

Since the late 1970s and early 1980s, many developed countries have not experienced inflation. To the contrary, inflation rates have kept falling, dragging interest rates lower. Forty years of disinflation This phenomenon of "disinflation" can be explained by three factors. The first factor is the demographic trend marked by a drop in the number of births. Indeed, the strong increase in the population after the Second World War (“baby boom”) has given way to a sharp decrease in fertility. This is explained by the increase in the percentage of women in the workforce, the rise in unemployment and lower economic growth which makes the financial situation of households more precarious, as well as the high costs related to children (childcare, education, health). The second is linked to the development of the service sector, which is less impacted by variations in the cost of raw materials. The third factor is related to new technologies, especially information technology (IT), which is highly deflationary by nature. For example, many trade unions are concerned about the increased use of robots that end up replacing humans for increasingly complex tasks. Robots can be up to fifty times cheaper than humans and they can work 24 hours a day, seven days a week. Interest rates can be calculated as the sum of economic growth and inflation. In a context where economic growth has been declining since 2008 (financial crisis) and inflation falling, it is not surprising to see that interest rates have been falling since 1982 in the United States. Chart: US 10-year rates over sixty years 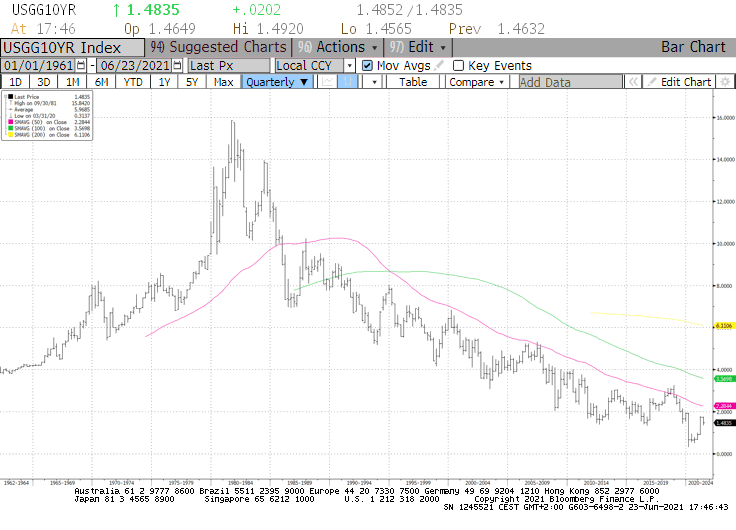 However, interest rates also reflect credit risk. For many years, the increase in public debt has not worried the markets. Yet we cannot exclude a backlash from investors who may ask for an increased risk premium (additional return) to compensate for this increased credit risk. Indeed, during the period from 2010 to 2012, when the economic crisis was raging in Europe, we saw the financial markets worry about the ability of countries to refinance or repay their debt. This caused an increase in interest rates and a stock market crash. During this period, Italian rates reached 7% and the risk of an Italian default was real. In the case of Greece, the state defaulted both on its bondholders and its citizens by reducing its social benefits, as well as its investments in healthcare, education, and infrastructure. The Covid-19 pandemic and the end of disinflation? In 2021, inflation figures are rising sharply. This is explained by the comparison effect with 2020, and the situation of global recession that followed the lockdown measures, as well as by the production capacity cuts in 2020 which are now causing shortages in many sectors. These shortages concern both finished products, semi-finished goods, and raw materials. In some industries, such as restaurants, retailers, or airline companies, there are also shortages of workers. Most of these shortages are expected to disappear over time, and the more modest historical growth rates are expected to replace the exceptional growth rates that most countries are expected to experience in 2021 and 2022. However, another factor can influence inflation. It is the money supply. With the increase in public debt, as well as the very expansive monetary policies carried out by the central banks which have been "printing money at full speed" for many years, there is a loss of value of currencies, which should induce inflation. This is well known, and it is one of the arguments put forward by cautious investors investing, in particular those that seek to increase their holdings in gold and precious metals. Governments have an interest in letting some inflation reappear to reduce the burden of servicing public debt. In conclusion, if the sharp rise in inflation linked to covid-19 appears to be temporary in nature (12 to 18 months), the increase in the credit risk of most countries together with the increase in money supply could lead to an increase in inflation, and therefore long-term rates. This would obviously be negative for the financial markets, more particularly: - High-quality bonds with medium and long durations - Equities, in particular high-valued equities Conversely, the following investments should be favoured: - “Value” shares such as healthcare and consumer goods - Shares in the financial and commodity sectors - Gold and precious metals - High yield bonds